"A revolver is more than enough to eliminate any foe."
―Typical Colors 2 description. 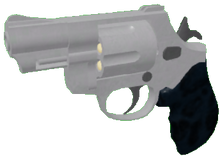 The EAA Windicator is a German revolver made by Weihrauch that appears to be a snub-nosed revolver.

The Windicator starting its damage fall-off has a one-shot capability upon a headshot at any range and on the body at closer ranges. The fairly fast rate of fire helps with quickly killing enemies. The reload time is very quick with the use of a speed loader to load the weapon.

However, the Windicator's drawbacks are the small 6-round capacity, despite the fast reload making up for the small magazine size, but the high spread as well. Combined with the somewhat fast rate of fire, spamming the Windicator results in the spread being very wide which forces players to get kills up-close.